Out of the blue, the government of Nicolas Maduro decreed on Monday that after Wednesday 100 bolivar notes, which up to now are the largest denomination banknote, will no longer be legal tender. New higher denomination bank notes are being introduced, although the exact date is still not known. There really is no logic behind this. The government has put out it’s own propaganda as to why this is happening, something along the lines of “The United States is stealing the banknotes and hiding them in Eastern Europe” Mind you, after everything that has come out of WikiLeaks recently about Hillary Clinton and the US, this theory is not really that far-fetched. 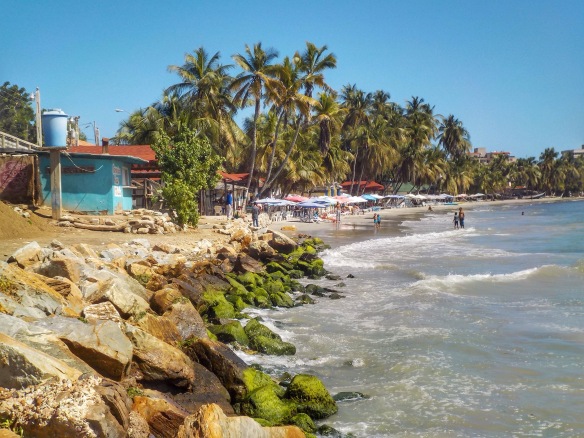 Anyway, whatever the reason for the banning of the 100 bolivar note, there has been a mad scramble across the country to get rid of them. You can either try to spend them or you can deposit them in your bank account. You can imagine what the banks look like at the moment with absolutely the entire population going to the bank on the same day… It’s worse than an Apple store on the day of the release of a new iPhone. So, naturally, I opted for the “spending” option. The reality for me is that even if I lose all the money, it doesn’t make any difference. I’m just in it for the sport of it, but for Venezuelan people it’s yet another insult on top of many injuries. Fortunately though, the government allowed an slight extension. You could use the notes in shops until Friday and you have next week to deposit them in banks. 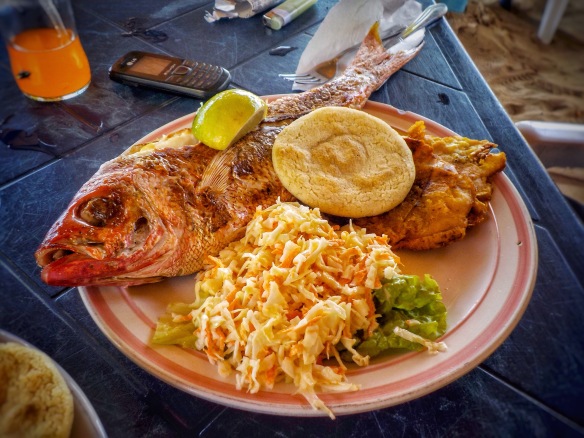 It’s funny how quickly you adjust to prices and how slowly old habits die. When I arrived in Caracas, I really lucked out an managed to changed my dollars at 4100 to 1 (the black market rate is now 2500 to 1), which has made everything absurdly cheap. Yet over the last few days, even when I’m desperate to spend my money, I still find myself haggling over prices. The other night we took a cab up to Playa Parguito, to engage in some more “dollar criminality”, as Nicolas Maduro refers to it. It’s about a thirty minute drive from La Caranta to Playa Parguito. Initially, the driver quoted us 4000 bolivars for the one-way trip, which after my windfall in Caracas makes that less than US$1. Nevertheless, I felt compelled to try and bargain him down to 3000… About 70 US cents. We finally settled on a price of 6500 bolivars to drive us there, wait while we do the deal, and then to drive us back. That’s about US$1.50 and yet I wondered if I had been too extravagant.

I ran into a bit of a sticky situation on Thursday night. I had to give someone some money but they refused to accept my 100 bolivar notes. Even though it wasn’t Friday yet, many people and shops had already stopped accepting them. There are no new notes available yet. If you want to pay in cash you have to use 20 bolivar notes or 50 bolivar notes. Most transactions are done by either direct debit, or transferring a payment from one person’s account to another. The direct debit for me isn’t a problem but I don’t have the app on my phone to make a person to person transfer. So I was stuck. As bizarre as it seems, the only thing he would accept as payment was gambling chips from the Casino Del Sol in Porlamar. 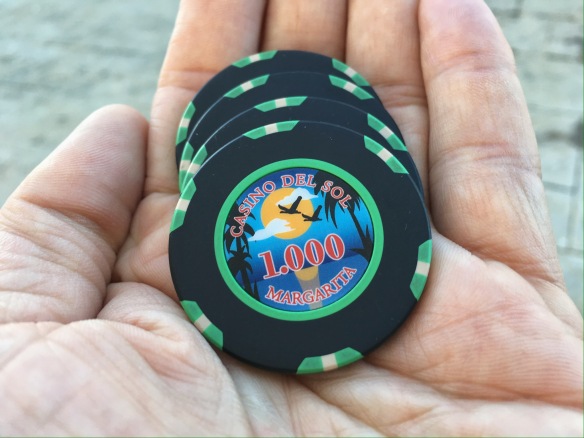 After driving around for two hours trying to trade my now useless banknotes in every disco, bar or shop for … hmmm… well, anything really, we admitted defeat and decided that the Casino Del Sol was our only option. We soon arrived and entered the gambling room. The whole place basically looks like the opening scene of the next episode of Banged Up Abroad. We felt a little uncomfortable just buying the chips and then walking out so we played a half-assed round of Black Jack and then left. I think I’m more adventurous than a lot of people but even still, I spent most of the time in the casino thinking to myself, “What the f*** am I doing??!!!” Anyway, we got our chips and made our payment. Everything was fine and we went home.

And in other news this week, I managed to get locked out of my maximum security fortress. Last Sunday, I was at the beach all day and arrived back at Punta Ballena at about 9 pm and couldn’t get in! The security guy at the gate was either unconscious, dead or had just packed up and gone home. There’s no buzzer or intercom either… So, after screaming and shouting for a few minutes, the only option I had was to jump over the fence.

Considering this is maximum security, it’s a pretty easy gate to jump over. There are no spikes or barbed wire on top and there’s a horizontal bar that goes across the middle so it’s very easy to get a footing. I had had a few rums, so climbing up was very easy… I thought my jump down the other side went smoothly as well until I woke up the next morning and found I had two toes swollen bigger than a Zika baby’s head and a floor covered in blood. So it turns out, it wasn’t quite the smooth operation I had thought. Hobbled and completely cashless, I am now well and truly under house arrest.

Venezuelan people are truly amazing people. I don’t know if it’s out of a sense of duty or out of a sense of pity but people here have been so incredibly kind, helpful and friendly towards me. Without their help I think I would’ve been eaten alive. Having no cash now means that I can’t take a taxi anywhere. A few people have offered to ferry me around in their cars when I need to go somewhere. There’s a real sense of camaraderie here… Perhaps having a common enemy (i.e the government) helps to bond people. Whatever it is, I’m a fan! 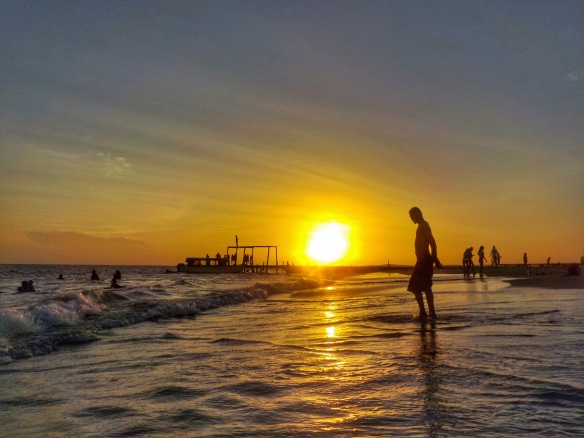 I arrived here in Pamapatar on Tuesday. It’s been four days now and I’m slowly adjusting to island life while experiencing more of the realities of Venezuelan daily life. Adjusting is a whole lot easier at home when I eat well, sleep well and do yoga… I haven’t exactly been a role model of healthy living here…. Combine that with the general stress of travelling plus the added stress of travelling in Venezuela and you have me having melt down moments…

Taking flights always works out longer than you think. Caracas to Porlamar is only a forty minute flight but ended up taking up pretty much the whole day. On top of all the usual stuff like getting to the airport, checking in and so on, the flight was delayed by about an hour and a half. The owner of this apartment, Senõr Folco, who lives in Miami, had arranged for a guy named Luis to come and pick me up, for a payment of course. Supposedly Luis did come, but because the flight was delayed he didn’t want to hang around so he left. It wasn’t a big deal. I could still get a taxi on my own and get to the apartment ok, but it was just a bit of a stupid situation as I spent about 30 minutes running around the airport in Porlamar looking for Luis. Pretty much every flight here since the beginning of the aviation industry in Venezuela has been delayed… I find it a bit odd that a local Venezuelan who has lived here all his life didn’t consider that and used it as an excuse.

One of the factors in choosing this place was that it had Wi-Fi INSIDE the apartment itself. A lot of places that I researched only had Wi-Fi in the foyer area on the ground floor. As it turns out “Wi-Fi inside the apartment” means hanging out over the edge of the balcony and extending your arm as far as you can and pointing your iPhone in the direction of the lobby. Then, if you’re lucky and the weather is fine, you may catch a faint signal. I contacted Senõr Folco and expressed my dismay at 1. being stood up by Luis and 2. being misled about the internet. Senõr Folco’s response? This is Venezuela. People have it a lot worse than you. Get over it. Well, yes of course that’s true… And I’m not that inflexible that I can’t adjust. But. That’s not the freakin’ point!!!! Is it?? I had a bit of a moment with Senõr Folco… Let’s just say that it would have been easier to talk down a hired hit man than talk me down… In the end though, I really couldn’t be bothered arguing so … I built a bridge and got over it!

Things were kind of easier in Caracas. Caracas is the “golden child” of Venezuela. Whatever shortages and issues there are, Caracas tends to get spared the worst of it. Supposedly water is rationed in Caracas but I never noticed it. Staying in Los Palos Grandes meant that food and services were plentiful and everything was within a safe and convenient walking distance.

It’s a different story here in La Caranta, Pampatar. La Caranta, and in particular this building, are considered to be one of the best places to live on the island. It’s very cozy! The location at the end of the road, right out on the edge of cliff is spectacular, and the view out to the ocean takes your breath away. Plus, they have 24 hour a day maximum security. However, it comes at a bit of a price. It’s pretty isolated and cut off from everything. There is absolutely NOTHING close by. Plus, given the security situation, you can’t just go off for leisurely strolls down the road. So, I’m feeling even more like I’m under house arrest! 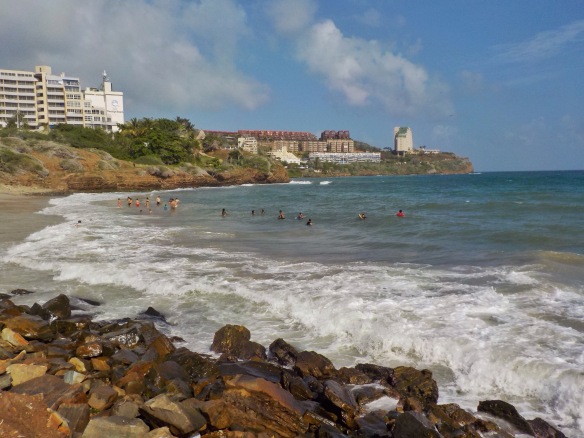 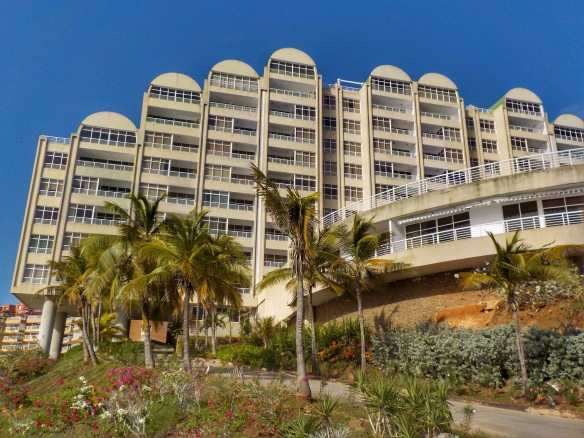 Water here is rationed… And I mean seriously rationed. It’s kind of weird because it’s rainy season and it rains a lot every day but still, water is rationed. And… a bottle of water costs about ten times the price of a full tank of petrol!! Anyway, the water goes on and off at different times every day. They do tell you in advance though. There is a reserve water tank but this needs to be filled manually, obviously when the town water is “on”. Once you get your head around the whole system and as long as you keep on top of it, it’s fine. But until you do, it’s a bit annoying. Murphy’s Law applies here…. The time that you find out that water is rationed and there is absolutely no water in the house or in the reserve tank is the time when you’ve just done the biggest, stinkiest, most disgusting poo of your life and there are guests in your house. I had to go begging the neighbour for a pale of water in order to sort out this issue. 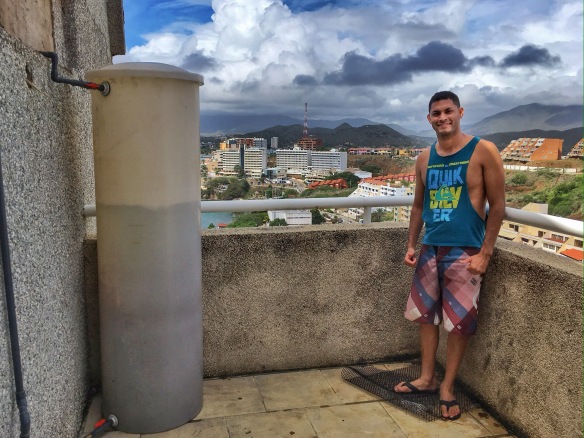 The biggest nuisance in Venezuela (for a foreign tourist at least) is just the insecurity. You really take it for granted living in Australia, having the freedom to go wherever you want, whenever you want, with your valuables in hand and in any state or condition. The chances of anything bad happening are pretty slim. Different story here in Venezuela. Apparently it’s better here on the island than in Caracas but still the streets are eerily deserted after dark and people constantly warn you not to go anywhere. As a result, I’ve become a kind of meteorologist while being holed up like Rapunzel in my Punta Ballena castle, endlessly studying cloud formations! 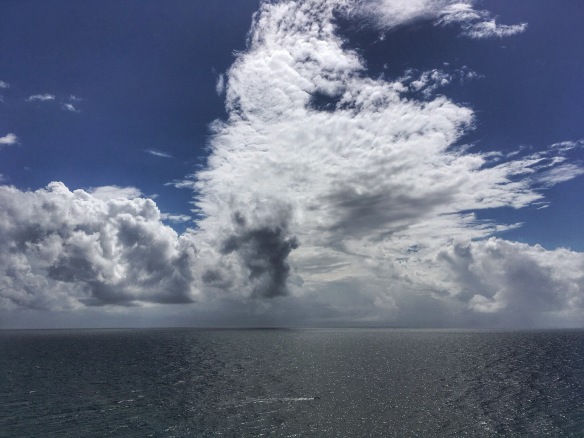 And just a couple more snaps from my island life… 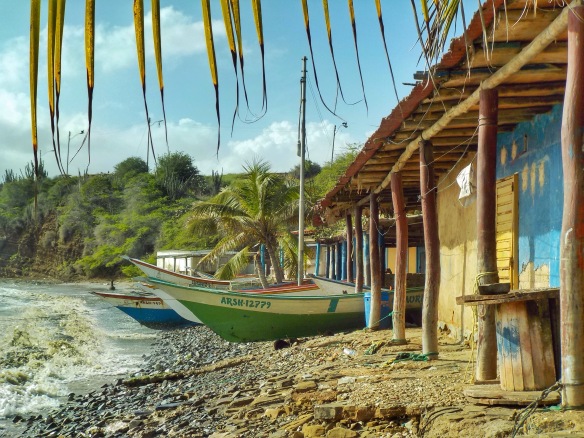 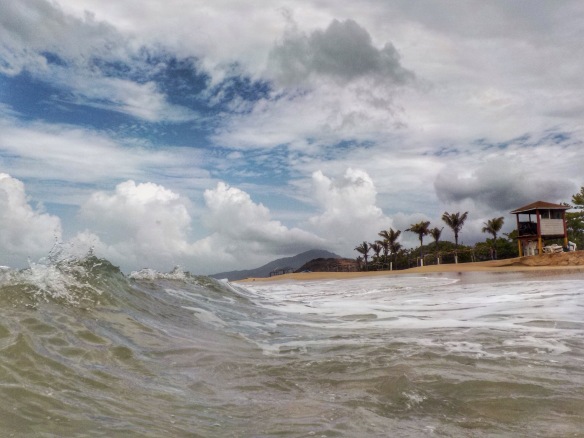 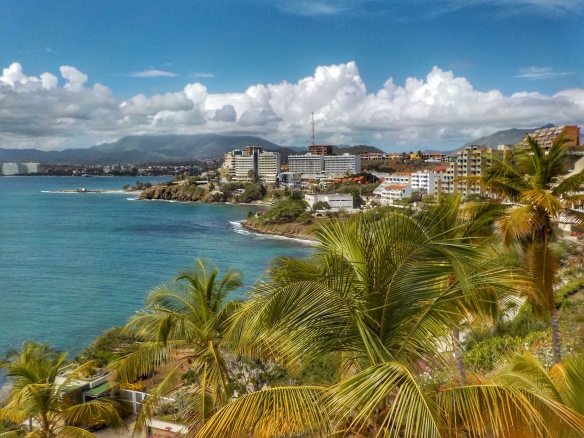 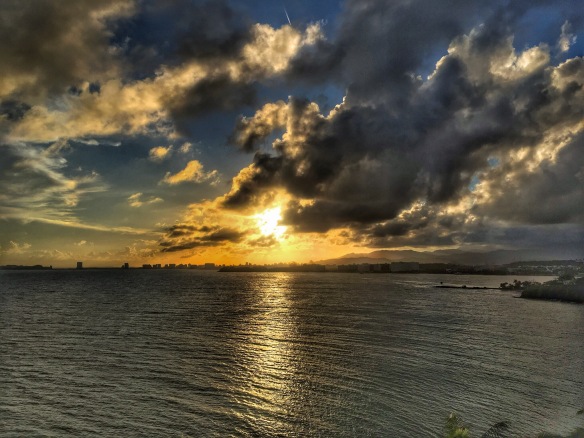