As I mentioned in the previous post, I haven’t really been diggin’ the Tel Aviv scene as much as I thought I would, so I decided to make a quick two day trip to the north. I had originally planned to see Haifa, Nazareth and Akko but in the end had to scale it down.  On paper, it all seemed quick and easy… Certainly travelling in Israel is easy, but by the time you factor in walking to the station or bus stop, getting lost on the way, waiting for and getting the train or bus, traffic jams and so on, it all takes a lot longer than you think.  Getting lost here at least isn’t a big deal.  Most people you stop on the street are genuinely helpful.  Usually when you stop someone on the street to ask for directions, no-one knows a thing.  Here, however, people know where things are and are able to direct you with military precision.

Israeli trains are good.  The train to Haifa is very comfortable and takes one hour.  I had initially planned to drop my bag off quickly and continue on to Akko, but that didn’t happen.  I arrived later than I though and the extreme heat makes everything that much more challenging.  So, I decided just to take a look at the Bahai gardens.  The Bahai gardens are stunning, one of the most beautiful and well maintained gardens that I’ve ever seen.  One thing to note is that all of Haifa, including the Bahai gardens, is built on the side of a mountain.  Yes, that’s right… The side of mountain … Mount Carmel to be precise.  What this means is, that the only two ways you will ever go in Haifa is extremely steeply uphill or extremely steeply downhill.  Downhill is not a problem except that it generally involves an uphill return journey at some point.  Walking up to the temple was a test of endurance.  Imagine doing Step Aerobics in your jeans in searing heat and humidity.  Or for the bikram enthusiasts who may be reading this, imagine doing a triangle pose that never ends.  So after traipsing up and down the mountain for a while, I was ready to relax.

Haifa is known as the city of coexistence and unlike Tel Aviv, there is a very strong Arab presence there. For the two nights, I rented a room from Hanna, a Palestinian Christian.  The Christian part is only significant because he told me to help myself to anything in the fridge once I arrived ( he wasn’t home at that time) … There was no food, but there was a bottle of gin, so I was able to help myself to that.  It was interesting staying with Hanna to be able to get a different perspective of what life is like in the “promised land” for Arabs.  He was reluctant to talk politics but I pressed the issue… And didn’t I just open up a can of worms!  You can pretty much imagine what he said… “I hate this fucking country!!” he shouted… Arabs are second class citizens in their own country who are continually discriminated against only because they are Arab.  What’s more they are banned from travelling in much of the Arab world because they hold Israeli passports.  Double whammy.  According to Hanna, Israel has simply recreated the Holocaust.  This time however, the Jews are the Nazis, the Arabs are the Jews and Gaza is the Warsaw Ghetto.

Beyond politics, Arabs are very genuinely hospitable people and I was made to feel very welcome. When I went to a restaurant he recommended for dinner, he phoned ahead and made sure I received special treatment.  I was even given a Palestinian desert on the house; kanafeh, which is a kind of sweet cheese and pistachio pastry soaked in sugar syrup.  It was really delicious but the portion they gave me was like the size of an extremely large main course.  Not wanting to offend anyone, I ate the lot!  Then, with that and a couple of araks under my belt, it was a very long and slow stagger back up the hill. 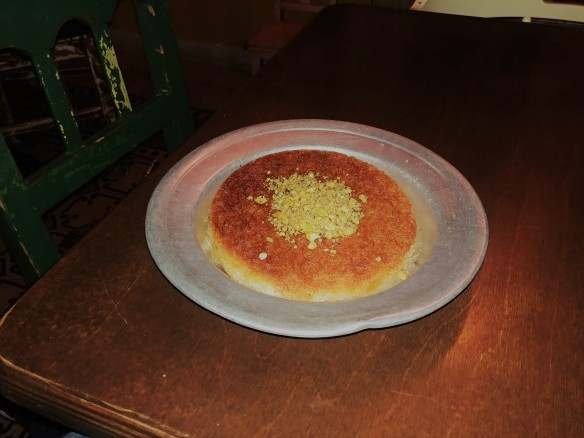 The next day, I made the bus ride out to Nazareth.  It was very simple.  For anyone who is reading this and might be interested in going, you take bus number 331 from Haifa HaShmona station and  get off at the last stop in downtown Nazareth.  It’s only 30 kms but takes between 60 to 90 minutes to get there.  I had read about Nazareth before I went, so I knew what to expect once I got there.  You imagine this kind of peaceful, rustic village surrounded by rolling fields of green.   The reality is that Nazareth is a large traffic choked Arab town full of kebab shops… Not that there is anything wrong with large Arab towns or kebab shops.  The Basilica of the Anunciation, Mary’s Well and St. Joseph’s church are right smack in the centre of town and beyond that is the old town with its souk. 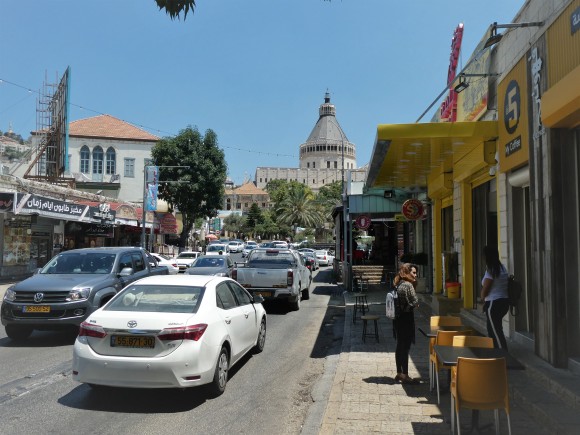 The Basilica of the Anunciation itself is relatively new but it’s built over the site where the angel Gabriel announced to Mary that she would conceive and bear the son of God.  When you go down the steps to the lower level of the basilica, you pass the grotto which is believed to be the remains of the childhood home of Mary.  While I’m neither Catholic nor particularly religious, I could feel that I was in a very special place.  I posted a couple of short videos on my Instagram (martinkoskins).

And now back in the beachy city of Tel Aviv … With regard to not diggin’ the scene here, another point to note is that there  are aggressive, biting fish in the water at the beach here.  If you stand still for even the shortest amount of time, the fish come and bite you on your heels or ankle.  I know I could put it down to having a free spa treatment, but it completely freaks me out and I scream like a howler monkey every time it happens!  The only way to avoid being bitten is keep swimming or treading water.  It’s a great workout but doesn’t exactly make for a peaceful relaxing time!