I’ve been in Caracas for about three and a half days now…Not that I count down the days on a holiday but it’s been an extremely intense time, teetering on the verge of tears all the time and all the voices in my head going off! You know, the ones that keep saying “You f***ing idiot… What the hell are you doing?” I’m really looking forward to slowing down and starting the real holiday, if that is in fact possible in Venezuela.
Flying is invariably always worse than you anticipate. By the time you factor in getting to the airport, checking in, transit times, flying times, getting out the other side, it all adds up! What seemed like a relatively easy flight to Caracas from São Paulo ended up being a gruelling 16 hours. Flying into Caracas was a little weird. The airport was fairly deserted of planes. My Avianca flight was the only non-Venezuelan aircraft in the field and the arrivals hall was pretty empty. The bonus is that you get through immigration and customs pretty fast! There were quite a few sideways glances in the arrivals hall and the immigration officer seemed a little surprised that a foreigner was here on holiday. With a puzzled look on her face, she kept asking me, “You’re here for what? Tourism????? Five weeks???” She didn’t even know if I needed a visa… She asked me!

My friend Yordano met me at the airport.

Everyone was terribly concerned that as an obviously non-Venezuelan person I would not get out of Maiquetia alive…. So he came out to the airport to meet me so I wouldn’t have to deal with any of the “abusers” (as he likes to call them, referring to customs officers and cab drivers) on my own. Yordano used to have a job in a bank, but the pay was so low that he couldn’t justify the time spent working there, so he quit and so now he has a lot of free time on his hands…. Lucky for me! We got a cab and he took me to meet the lovely Liza to get me settled in Los Palos Grandes and try to get all the money business sorted out. The trip from the airport was full on, particularly with very little sleep: a non-stop barrage of dos and don’ts for Caracas (mostly don’ts though). The locals really instil fear into you, which is a good thing, but makes you feel very on edge all the time. Caraquenõs speak like “verbal diarrhoea on speed”. People who are not used to dealing with people who don’t speak their language or who have never been in a country where they are forced to speak a second language, simply don’t understand the concept of “please speak slowly and clearly”. Although I speak some Spanish, everything I learnt seems almost useless in Caracas. They drop so many letters from words … It’s taking a while to get my head around it! I’m permanently being introduced as “Mati Koki”… “Are you tired” becomes “ta cansado” instead of “estas cansado”… The other day we got a “chi” (chip) for my phone… I should be very careful of my “lato” (laptop)… And don’t wear cho (shorts) to the club. WECO (welcome) A CARACA!!

Caracas gets a very bad rap. I personally like ugly cities anyway… The people are generally nicer because they have to try harder. Beautiful cities = horrible people. Just look at Barcelona…. What a nightmare dealing with those Catalans! I admit so far I have seem very little of the city, only the drive from the airport and a bit of walking around Los Palos Grandes, Altamira, La Castellana (the so-called “best parts”) and a bit of the downtown. So far, I think it’s not that bad, at least by Latin American standards. Caracas had it’s boom time in the 70’s and the architecture reflects that. Around Altamira, it’s very attractive. Other parts of the city are kind of run down. The setting is absolutely stunning … It lies in a valley surrounded by hills and mountains. Admittedly most of the hills are covered in shanty towns. It’s very green and you can always hear birds chirping.

After three days of trying, I finally managed to open a Venezuela bank account, changed US$200 in cash at a rate of 4100 bolivars to the dollar… AND got 220 000 bolivars in cash!!! I deserve a gold medal at the Black Market Olympics!

Anyway, we made a call to a lady who Yordano only refers to only as “La Gorda” (the fat one) and she put us on to “the dealers”, Margarethe and Pedro. The whole day (Wednesday) was spent hanging around waiting for Margarethe. You know how it is with Latinos… First she was supposed to come over to my place at 11.30 am…. Then it was 12.30 … 12.30 became 4.30 … But in the end she couldn’t make it at all and so we were instructed to meet her at 7 pm at Parque Carabobo metro station to do the deal. We met her at the station, in rush hour, in the pouring rain, surrounded by extremely dodgy looking people and went into some dirty corner next to a trash room, all huddled around very closely and did our secret business. It felt like the equivalent of shooting up heroin in Pitt Street Mall.

The whole of Thursday was spent running around doing banking. I’m a bit sick and to be honest, the whole thing is a bit of a blur. I don’t know how Yordano did it. I just followed instructions, signed and did my thumb prints… But he called his friends at the bank and then the next thing I know, I have an account. It is otherwise impossible for tourists to open an account here.

One of the many aspects of the economic crisis here is that there isn’t enough cash to go around. The largest denomination note is only 100 bolivars, which is now worth about 2.5 cents!! The government hasn’t actually had enough money to print more money, so cash is being rationed. The daily withdrawal limit is only 10 000 bolivars. There are huge queues at banks everywhere. People use debit cards for most transactions, but for some things you absolutely DO NEED cash.

I don’t know how Yordano did it, but we took about an hour bus ride out to a place called Los Teques. I just remember from one of the first episodes of Banged Up Abroad, when those two British guys ended up in prison in Venezuela, it was in Los Teques! We went to visit a friend of his who works in a MAKRO supermarket there. Again, the whole thing is a bit of a blur, I just did what I was told… I don’t know what he did, but we shook a few hands and the next thing I know is that I have a bag of 220 000 bolivars worth of cash!

It’s been a week and a half or being solidly on the go and now I’m paying the price… I’ve got a cold! Back to bed today I think. And just some assorted snaps…

My street in Los Palos Grandes 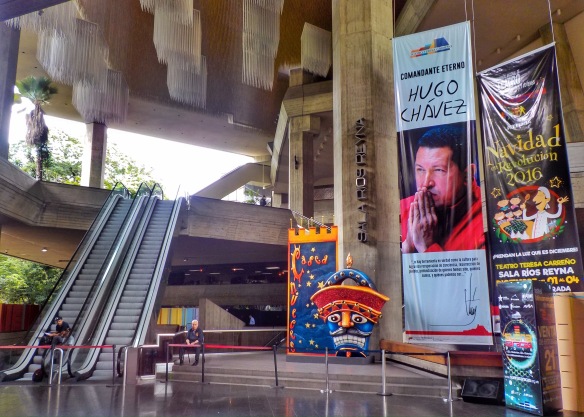 Hillside shanty town (one of many!)